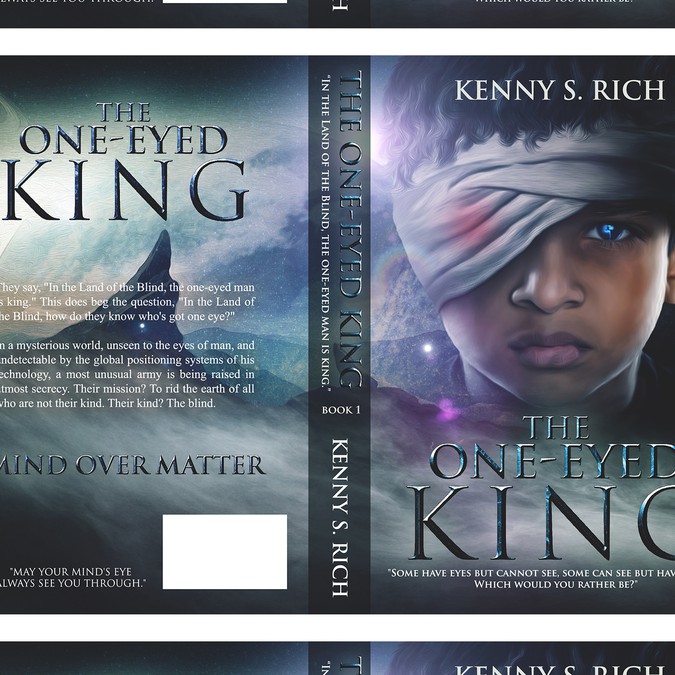 Ksfomunung needed a new book or magazine cover design and created a contest on 99designs.

A winner was selected from 41 designs submitted by 7 freelance designers. 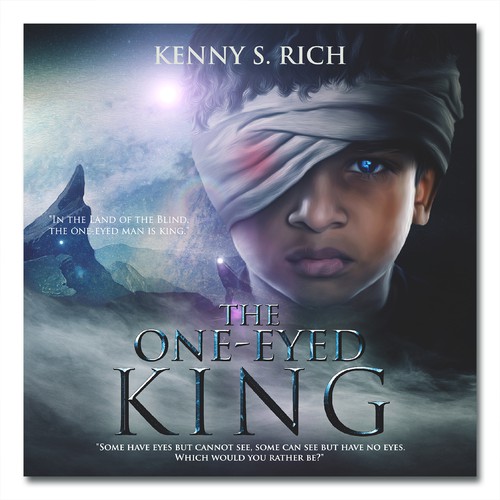 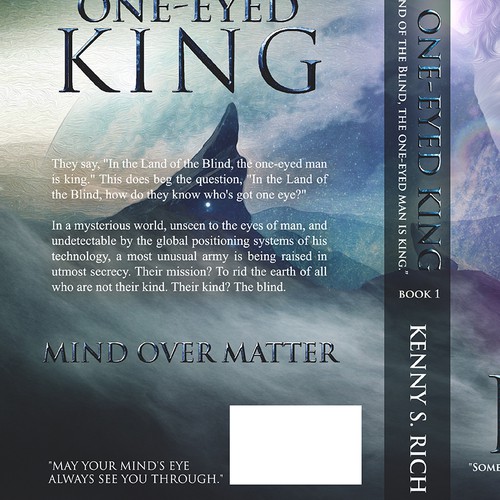 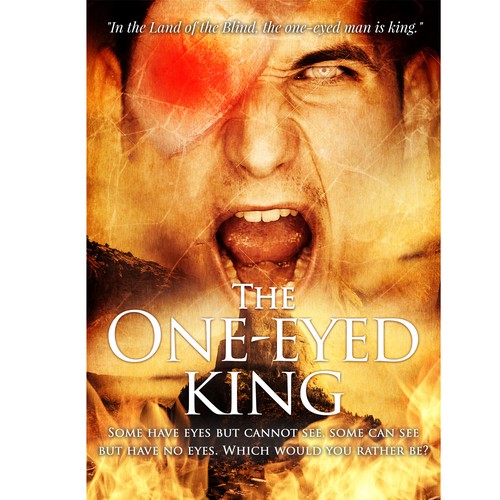 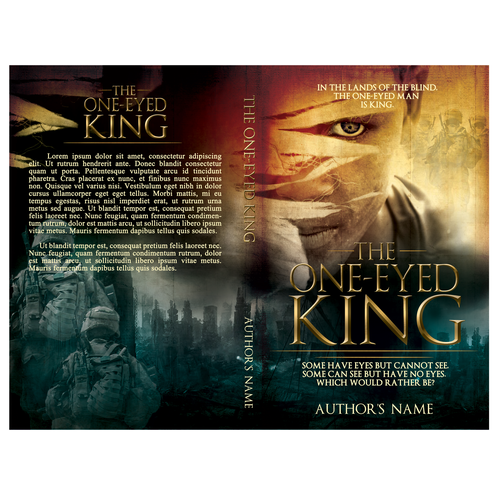 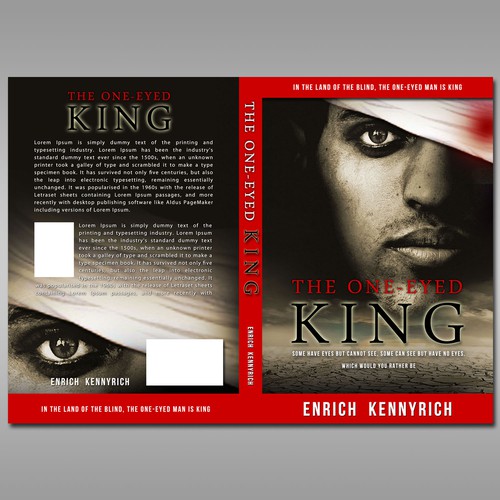 Winner - Andrei Bat
Again, Andrei was super patient and brought my book cover to life. He is a genius at what he does. Thank you so much for the marvelous book covers. I can't wait until you create my next one.
- virsatyle

I need a captivating book cover for my upcoming original science fiction & fantasy book entitled "THE ONE-EYED KING". Please note that this is the first book in a planned series. I'll be needing future book covers, so I'm really looking forward to stellar designs! :-)

In the future, a nuclear war, perpetrated by a ruling entity known as The ARK, has devastated Earth; and to combat it, a blind warrior recruits a young blind boy with special powers to help him build a secret army to defeat it.

IORI [eye-oh-ree] is a timid, mild-mannered, unusual preteen boy. He is blind, and his right eye is blank, devoid of a pupil. He leads a mundane, but trying ordinary life, avoiding his many bullies as best he can at the small orphanage where he’s lived for as long as he can remember.

Everything changes, however, when a mysterious stranger from his recurring visions suddenly appears at the orphanage accompanied by a dozen uniformed blindfolded young men. This menacing man, in particular, has the same condition as Iori, in the opposite eye—blind as well, with a pupil-less left eye. He reveals that he and Iori are connected, claiming that the boy is the legendary ‘One-Eyed King’ of the ‘Land of the Blind’; and he is therefore destined to lead their ‘All-Seeing Army’ to seal the fate of the ‘myopic people’ and bring about the end of the world of the ‘seeing man’.

Displaying mysterious powers to prove his point – powers he insists the boy also possesses – the stranger intimidates Iori into going with him, against the boy’s will. Will Iori fulfill this sinister prophecy and become who he is destined to be? Will this indifferent blind orphan boy evolve into a reluctant villain? Will the would-be One-Eyed King turn his back on humanity and lead this powerful mystic army against The ARK and the world he was once a part of?

Here's my vision for the cover:

I'm thinking an image of the protagonist, the teen prodigy, perhaps with a (white) blindfold covering one of his eyes, with the hint of a red glow apparent from underneath his right eye. Somewhere on the cover, perhaps on the blindfold, should read the words, "The One-Eyed King."

Elsewhere on the cover, the quote, "In the Land of the Blind, the one-eyed man is king." Actually, maybe this can be on the blindfold, with the title above the prodigy's head.

Below, we could see the words, "Some have eyes but cannot see, some can see but have no eyes. Which would you rather be?"

That's pretty much my vision for the book cover, but I encourage you to incorporate your own vision for a superb cover design!

Iori [eye-oh-ree] is a timid, mild-mannered, unusual preteen boy. He is blind, and his right eye is blank, devoid of a pupil.

"Of all the people at Sacred Heart, Bethlehem had to be the most intrigued by ‘Mysterio Boy’ as she would playfully call Iori. She said she loved his ‘pretty eye’, but she wasn’t referring to his big left eye featuring a pupil decorated with different shades of hazel, which oddly enough, almost resembled hers, although her pupils were a tad bit brighter and sported a more uniform shade of hazel. She meant his big, all-white blank right eye. Iori thought Bethlehem was weird herself for insisting on being friends with him, even though he appreciated her friendship. He didn’t fancy himself a handsome boy, but liked to imagine he was, although he did not think he could be good-looking while missing a pupil in one eye. In truth, the wonder-kid had endearing features—an almost caramel complexion, a long, rectangular face featuring eyelashes arguably too long for a boy, and curly, short jet-black hair that would have led many to believe he may have been of mixed racial heritage, although he was born in the former African nation of Ethiopia. Iori had never known his parents; and because he could not see his own reflection, he couldn’t even guess what either of them might have looked like." -Excerpt from the book.

Get started now
Design a Romantic Comedy Cover for Icasm Press
$299
Romance books...
23
entries
6
designers
Create a feel good book cover for a summer crime comedy at a lake
€500
I am a German writer. This will be my first self-published book. I'd like the readers to feel good and happy.
97
entries
28
designers
RESTYLE MY BOOK COVER INTO A BEST SELLER'S ONE !
€279
It's a tale about personal growth written through the eyes of a child. Inspiring book to learn how to create our dre...
156
entries
29
designers
Create an eBook cover for 'The Outsider Tales'
339 A$
I write books! The target audience is readers of speculative fiction. Book readers in general....
66
entries
17
designers
CALIFORNIA BUST book cover
US$499
Author
100
entries
26
designers
Create hot cover for Sara Forbes' latest romantic billionaire series!
US$299
I'm a romance author writing a series (3-6 books) in romantic comedy/ new adult genre. My target audience is readers ...
130
entries
34
designers
Learn more about book or magazine cover design
See how it works